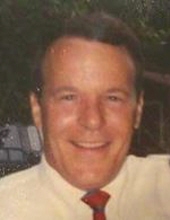 Jim had a deep faith that sustained and nurtured him throughout his life. He loved his wife, children, and grandchildren deeply with his huge heart and humorous personality. He loved to tell stories over the years to his children, grandchildren, family and friends. He worked for ATT formerly Indiana Bell for 38 years. He served honorably in the U.S. Army Signal Corp from 1966 to 1969. He spent many years officiating wrestling and football and was inducted into the IHSAA Hall of Fame with his brother Dick. He lived his retirement years in peace with his wife Kay on his river home surrounded constantly by children and grandchildren.

Visitation will be held Wednesday, April 4, 2018 at the Daniel F. O’Riley Funeral Home, 6107 S. East St. (US Hwy 31 South) from 2:00 p.m. until 8:00 p.m. A Mass of Christian Burial will be at Holy Name Catholic Church in Beech Grove on Thursday, April 5, 2018 at 10:00 am.
In lieu of flowers, donations can be made to the Catholic Youth Organization of Indianapolis. Visit www.OrileyFuneralHome.com where you may express online condolences to the family.

To order memorial trees or send flowers to the family in memory of James W. "Jim" Beeson, please visit our flower store.