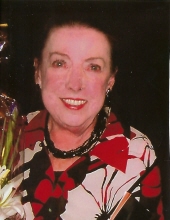 She graduated from St. Mary’s Academy and continued her education at Butler University. Joan was the only female graduate from the 1952 pharmaceutical program at Butler. She worked as a pharmacist for many years at the Indiana University Medical Center and at various IU Health facilities, retiring in 1992 after a 40-year career. She was a former member of St. Patrick Catholic Church and more recently was a member of St. Jude Catholic Church. A talented seamstress and designer, Joan was involved with theater in Indianapolis, creating costumes for Footlite Musicals and the former Avondale Playhouse. She also was a docent at the Indiana State Museum.

Joan was known for her love of opera, theater, music, sewing, and comedy. One nephew described her as a “powerhouse of wits, strength, and grace. She was whip-smart yet never put on airs. One moment, she’d be explaining the significance of a specific opera (La Bohème was her favorite), and, just minutes later, she’d be laughing at an off-color joke. She loved the comedy of Joan Rivers, Mel Brooks, Jerry Seinfeld, and others like them.”

Joan didn’t have any children, but she was influential in many of her nieces’ and nephews’ lives. Survivors include many nieces, nephews, great nieces, and great nephews.

Visitation will be Saturday, January 30, 2021, 9:00 a.m. – 10:00 a.m., at St. Jude Catholic Church, 5353 McFarland Rd., Indianapolis, IN 46227. A Mass of Christian burial will follow at 10:00 a.m. Burial will be at Oaklawn Memorial Gardens, 9700 Allisonville Rd., Indianapolis, IN 46250. The Mass will be livestreamed at https://www.facebook.com/orileyfuneralhome/. Memorial contributions can be made to the American Cancer Society. The O’Riley Funeral Home is handling funeral arrangements.

To order memorial trees or send flowers to the family in memory of Joan Baker, please visit our flower store.