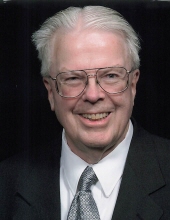 John died peacefully, surrounded by family, after a short illness. The oldest of Henry and Loretta Mackell’s three children, John attended St. Philip’s grade school and graduated from Cathedral High School, class of 1944. After graduation, John enlisted in the Army Air Corps during the final years of World War II. He was qualified as “Combat Air Crew” and specialized in aerial photography for the B-29 Superfortress. After the war, John was Honorably Discharged with the rank of Sergeant and went on to attend Butler University. His time in the Air Corps inspired a lifelong love of photography, a gift he shared with his family his entire life. Eventually photography led him to a forty-year career in lithography beginning at Allied Printing Company in Indianapolis. He retired from Bredensteiner & Associates Printing Company in November of 1988.

John was extremely proud of his Irish heritage and enjoyed studying genealogy and being a member of the Ancient Order of Hibernians and American Legion. His greatest pride was his family, and he was a devoted and cherished husband, father, grandfather, and Pal. John married Rosemary Gasper on June 23, 1951, at St. Peter and Paul’s Cathedral, and they were blessed with five children: Thomas Mackell (Carolyn), Paul Mackell (Liz), Ann Wellington (Al), Joseph Mackell (Candee), and Kathleen Taylor (Greg). He was later blessed with seven grandchildren and twelve great-grandchildren.

To share a condolence or story please visit www.orileybranson.com

To order memorial trees or send flowers to the family in memory of John Charles Mackell, please visit our flower store.