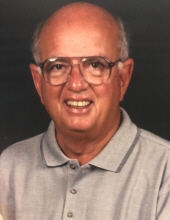 Buck worked as a planning engineer at Indiana Bell, retiring in 1991 after 32 years of loyal service. He served in the Army National Guard from 1956-1959. He was a longtime member of St. Barnabas Catholic Church where he spent many years coaching CYO basketball. Buck was an avid Indiana University basketball fan and a huge fan of Bob Knight. He adored his grandchildren and never missed the opportunity to attend their sporting events and activities. Over the years, he enjoyed spending time with his family and friends at his home in The Villages, Florida where he liked to play golf and take his grandchildren on golf cart rides.

In lieu of flowers, memorial contributions can be made to the Catholic Youth Organization or St. Barnabas Athletics.

Buck’s Life Celebration® visitation will be on Friday, October 7, 2022, from 11:00 AM to 2:00 PM in the chapel at O’Riley - Branson Funeral Service & Crematory, 6107 South East Street, Indianapolis, Indiana 46227. The Funeral Service will begin at 2:00 PM on Friday in the funeral home with Father Paul Shikany officiating. Burial will follow in Calvary Cemetery, Indianapolis. To sign the online guest registry or share a favorite memory of Buck, please visit www.ORileyBranson.com.

To order memorial trees or send flowers to the family in memory of John D. "Buck" Bellush, please visit our flower store.