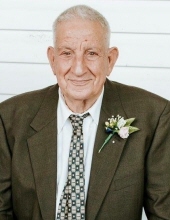 Mr. Sufan was born February 13, 1929, in Ain-Arik, Palestine to the late Jamil and Hannah Sufan.

Mr. Sufan worked as a pipefitter at Penn Central and its successor Amtrak Railroad until his retirement in 1995. A longtime member of Holy Name Catholic Church, he was deeply devoted to his family and his Catholic faith. A hard worker and a man of many talents, Mr. Sufan enjoyed tending to his yard, working on home projects, and helping others.

He was preceded in death by his wife of 70 years Martha, and his two brothers Mousa and Elias.

Visitation will be held Thursday, October 26, 2017 3 to 7 p.m., in the Daniel F. O’Riley Funeral Home, 6107 S. East Street, where morning prayers will be said at 10:15 a.m. Friday, October 27, 2017. The Mass of Christian Burial will be celebrated at 11 a.m., Friday, in Holy Name Catholic Church. Burial will follow in Calvary Cemetery. Visit www.ORileyFuneralHome.com to share a favorite memory or to sign the online guest registry.

To order memorial trees or send flowers to the family in memory of John H. Sufan, please visit our flower store.