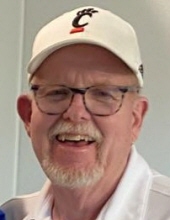 John T. Morand, 64, of Whiteland, passed away at his residence surrounded by his loved ones on June 30, 2021 after a long and courageous battle with pancreatic cancer. John was born in Cincinnati, Ohio to the late John L. and Mary E. (Gross) Morand. On May 30, 2009 John wed Julia L. “Julie” (Kahle) Morand in St. Barnabas Catholic Church; Julie survives.

A man devoted to his faith; John was a member of St. Barnabas Catholic Church in Indianapolis where he enjoyed being active in the parish. When not active at church, John enjoyed being outside. He loved to fish, travel, especially on motorcycle trips, and golf. Above all, John truly loved doing these things alongside his family.

John went on to be an extremely dedicated and successful construction superintendent for numerous companies throughout his career. He began working for Turner in Indianapolis in 1979. In May of 1997 he became employed with Smoot Construction and was involved in notable projects such as the Chrysler Transmission Plant in Kokomo and FedEx. In February of 2000 John began to work for Shiel Sexton where he supervised projects for The Children’s Museum and the Indianapolis Marion County Public Library. John was most recently employed by Meyer Najem where he completed two construction projects that he was incredibly proud of, the Veteran’s Affairs Outpatient Centers in both Jacksonville and Tallahassee, Florida.

Despite having an extensive career and work history, John was a humble man who believed his greatest accomplishment was his family and the unconditional love he was able to experience through each of them. John leaves behind a tremendous legacy to his wife, children, and grandchildren.

Along with his parents, John was preceded in death by his brother, Kevin Morand.

John's Life Celebration® visitation will be Friday, July 2, 2021 from 4:00 to 8:00 PM, at the O'Riley Funeral Home, 6107 South East Street, Indianapolis, Indiana 46227. The Mass of Christian Burial will be celebrated on Saturday, July 3, 2021 at 1:00 PM in St. Barnabas Catholic Church, 8300 Rahke Road, Indianapolis, Indiana 46217. In lieu of flowers, John requested that those who are able to donate blood make a donation at their local blood bank in his memory. Please visit www.ORileyFuneralHome.com to leave an online condolence for the Morand family.

To order memorial trees or send flowers to the family in memory of John T. Morand, please visit our flower store.