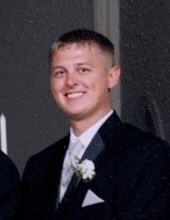 Kenneth R. Maurer (Rick), 38, went to be with the Lord on Thursday, February 28, 2019 at Eskenazi Hospital in Indianapolis, Indiana after fighting a courageous battle against a rare medical condition caused by a life-threatening reaction to a medication, a condition known as Stevens Johnson Syndrome (SJS). Rick was born on November 6, 1980 in Richmond, Indiana and was a graduate of Richmond High School in 1999, where he was an Honor Student and played basketball for four years. He graduated from the University of Indianapolis in 2003 as a double-major in Business Administration and Sports Management. While living in Indianapolis over the last 20 years, he was a manager at Longhorn Steakhouse and On the Border Mexican Grill, and he most recently was employed as a statistician for Major League Baseball.

Rick enjoyed all sports and was an avid fan of the Cincinnati Reds and Bengals. He loved spending time out on the lake while going boating, water skiing, and tubing. He also loved the countless family gatherings where he was able to play board games and have fun with all his family. His greatest joy and accomplishment in his life were his two children, and he was a dedicated father who loved his children unconditionally.

He leaves behind his wife of 10 years, Lisa, and their two children, Ralyn (8) and Isaiah (5). He is survived by his parents, Kenneth and Judy Maurer of Richmond, Indiana; sister Maria (Brad) Tinkle of Indianapolis; brothers Gary (Erin) Maurer of Indianapolis, Brian (Brooke) Maurer of Williamsburg, Indiana, and Mikey Maurer of Fort Lauderdale, Florida; mother-in-law Frances Boyd, sister-in-law Lee Ann Wooton, and brother-in-law Casey Boyd; as well as numerous nieces and nephews.

Arrangements have been made through Daniel F. O’Riley Funeral Home with all services taking place at St. Jude Catholic Church at 5353 McFarland Road, Indianapolis, IN. 46227. Friends and family will gather at St. Jude from 4:00pm-7:00pm on Sunday, March 3rd, and the Mass of Christian burial will take place on Monday, March 4th at 10:00am with burial to follow at Forest Lawn Cemetery in Greenwood, Indiana.

In lieu of flowers, his family asks that donations be made to the Stevens Johnson Syndrome Foundation at sjsupport.org, the Richard M. Fairbanks Burn Center at Eskenazi Health at https://www.eskenazihealth.edu/health-services/burn-center, or your favorite charity.

To order memorial trees or send flowers to the family in memory of Kenneth R. "Rick" Maurer, please visit our flower store.