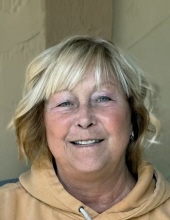 Kimberly Ann Busald passed away on Wednesday, December 30th 2020, surrounded by her husband and children. Kim was born January 15th, 1958 to Patricia Hogan and Wayne Wolven. She was little sister to Debbie and big sister to Karen. The three girls have always been very close and loving sisters.

As a child, Kim’s family moved to a new home, next door to a boy named Garry. Kim and Garry were childhood sweethearts, sharing many adventures. Kim grew close to Garry’s parents, Jo Ann and Harold and sister Marcia, a bond that would strengthen over the decades. Kim and Garry were married in 1980.

She began working at AUL, where she worked for 35 years. In 1984 they became parents to their son, Kyle, and a new chapter of joyful adventure began. Two years later, a beautiful daughter, Ashlie, completed their family. The four was not only a family but a gang of best friends. They have so many beautiful, fun, and hilarious memories. They have been long-time parishioners at Saint Jude Catholic Church and have shared many important milestones there. The fairy tale continued when they were blessed with five grandchildren: Joanna, Samuel, Finn, Kimber and Harper. Kim was the kind of Mamaw every child would dream of: soft loving hugs, eager to play, first to laugh at their silliness and showering them with love and attention.

The last year of her life was spent playing with her grandbabies, watching more cartoons than any adult should have to endure, splashing in the pool with the kids, enjoying a cup of coffee with her best friend and sweetheart, supporting and guiding her children and daughter-in-law, making food for her mother-in-law, having poolside lunches with sweet tea with her sisters and mother, camping with the whole family, and ending each day as she had since she was a teenager, with a quiet chat with her beloved Garry. She had a beautiful life and despite many obstacles, she lived life to the fullest. She will be missed so intensely, as much as she has been loved. She was an angel on earth, and now she is our angel in heaven.

Visitation will be Tuesday, January 5, 2021, 11 a.m. – 12:30 p.m., at the O’Riley Funeral Home, 6107 S. East Street. Prayers will begin at 12:30 p.m. at the funeral home, followed by Mass of Christian Burial at 1 p.m., in St. Jude Catholic Church. Mass will be livestreamed on the O’Riley Face book page, https://www.facebook.com/orileyfuneralhome/. Burial will be at Calvary Cemetery. Memorial contributions may be made to the Rheumatoid Arthritis Foundation. Visit www.ORileyFuneralHome.com to share a favorite memory or to sign the online guest registry.

To order memorial trees or send flowers to the family in memory of Kimberly Ann Busald, please visit our flower store.