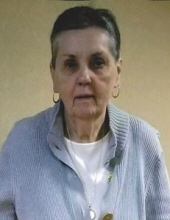 Janet was a member of Holy Name Catholic Church in Beech Grove and was stay at home mother. A loving wife, mother, grandmother, great grandmother, and friend Janet’s memory will be cherished by her loving family and friends.

Janet is also preceded in death by her great grandson, Danny Jackson; her brother, Robert and her sisters, Charlene and Donna.

Family and friends will gather to celebrate the life Janet Estes from 11:00 a.m. until 1:00 p.m. on Wednesday, May 29, 2019 in the Daniel F. O’Riley Funeral Home, 6107 S. East Street, Indianapolis. The funeral service will begin at 1:00 p.m. on Wednesday at the funeral home. Burial will follow at Forest Lawn Memory Gardens in Greenwood. In lieu of flowers, please consider making a donation to the Kidney Foundation of Indiana; envelopes will provided at the funeral home. Visit www.OrileyFuneralHome.com where you may express online condolences to the Estes family.

To order memorial trees or send flowers to the family in memory of Lois "Janet" Estes, please visit our flower store.