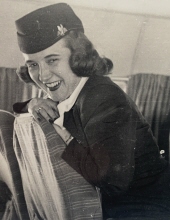 Margaret Clare Kennedy Ronan was born in Chicago on June 29, 1926 to Irish immigrants John Kennedy and Nora Connolly. She had one brother, Johnny (later ordained Fr. Thaddeus), born in 1927.

Margaret, also known as Margie and Maggie, attended Visitation High School and was proud to be the 1944 senior class president. After graduation, she worked in downtown Chicago at The Fair department store long enough to turn 21 and join American Airlines. After graduating from stewardess school in Ardmore, OK, she went to work “on the line”, first based at La Guardia in NYC, then Memphis, and finally returning home to fly out of her back yard, Midway airport.

On September 20, 1952, Maggie married Tom Ronan, recently graduated from Loyola dental school. They were Southwest side neighbors and had known each other since grade school. That was the end of her airline career; in those days when you were married you were done!

Having bought a dental practice in Highland Park, the newlyweds moved north to start a new life and a family. Theirs grew to five children; Mark 1953 (Judi), Christine 1956, Tom 1961 (Cheryl), Jim 1962 (Marcela), and Kate 1963 (Pete Sizemore). Maggie was very active at Immaculate Conception parish and school, as well as Green Bay Road school. She was known for her outgoing personality and genuine kindness, and was always ready to share a laugh with her friends, family, and neighbors. She remembered the names of all of her children’s classmates, siblings, and parents… For the next 60 years!

On April 22, 1970, Tom had a heart attack and died suddenly. Maggie had five kids, aged 6 to 16, who she referred to as “the fabulous five”. She had to gather her strength and carry-on… That she did and with great courage, strength, and love. She was always grateful for the help of her church, friends, and relatives.

As the years flew by, her happiness grew to see her children marry and welcome 10 grandchildren and three great grandchildren. They were the heartbeat and joy of her life: Katie, Molly, Joseph, Phoebe, Carla, Claire, Michael, Lucia, Miranda, Faith, Ronan, Desmond, and Rayah. Each of them was blessed to have unconditional love, endless hugs, and lullaby songs. Each of them carries touching stories and memories of a lifetime with Gramma Maggie.

Maggie passed away peacefully at 96 on November 14, 2022 in the presence of loving family. Her faith in God and her love of family is an everlasting gift to us all.

A memorial mass will be held on  Friday, June 30, 2023 with at gathering at 5 PM, memorial Mass of Christian Burial at 6 PM, and a celebration following at the Old St. Patrick Catholic Church, 700 West Adams Street, Chicago, Illinois.  Please RSVP to MarkRonan@comcast.net.

Memorials in Maggie's name may be made to New Melleray Abbey, 6632 Melleray Circle, Pestoa, Iowa 52068

To order memorial trees or send flowers to the family in memory of Margaret Clare Kennedy Ronan, please visit our flower store.