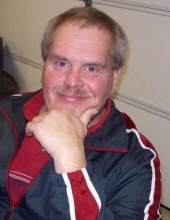 Mark R. Shaw, 60, of Kansas City, Missouri, passed away on November 24, 2021. Mark was born on April 28, 1961 in Indianapolis, Indiana to the late Robert and Julia (Mabe) Shaw. Mark graduated from George Washington High School in 1979, where he was active in athletics and music.

Mark was currently employed by Menorah Medical Center as a Sterile Processing Manager. He obtained an Associate of Surgical Technology degree and was a member of the International Association of Healthcare Central Service Material Management. There was no doubt that Mark was passionate about his work; he was often referred to as the “workplace expert” as his colleagues always came to him with any questions or concerns.

A sports fanatic, he loved coaching youth sports such as football, basketball, and baseball. Cheering on his favorite NFL team, the Indianapolis Colts or going to the Indy 500 at the Speedway were things Mark truly enjoyed. When not captivated by a sporting event, Mark could be found playing Euchre or Texas Hold’em, watching American Pickers or The Curse of Oak Island on the History Channel, or fishing and camping. He was musically inclined and loved listening to his favorite artists such as Queen, Chicago, The Bee Gees, Neil Diamond, and John Denver.

Outside of work and his favorite activities, Mark was a devoted to his family. He was an extremely caring father to his sons. Mark enjoyed truly getting to know others and was truly a friend to all that he crossed paths with. Mark will be remembered as a true family man who was always generous with his knowledge and his time. He was an incredible dad, awesome little brother, and loving son to his parents. His ability to crack a “dad joke” and outgoing persona will be dearly missed by all of those who loved him.

Preceding Mark in death is his son, Mark Shaw, Jr. “Little Mark” and his sister, Judy Hensley, along with his mother, Julia (Mabe) Shaw, and father, Robert L. Shaw.

Mark's visitation will be held on Thursday, December 2, 2021 from 5:30 to 8 PM in the O'Riley Funeral Home, 6107 South East Street, Indianapolis, Indiana 46227. The funeral service will begin at 10:00 AM in the funeral home on Friday, December 3, 2021. Mark will be laid to rest in Floral Park Cemetery, Indianapolis, following the funeral service. O'Riley Funeral Home is serving the family. Please visit www.ORileyFuneralHome.com to share a favorite memory of Mark with his family.

To order memorial trees or send flowers to the family in memory of Mark R. Shaw, please visit our flower store.