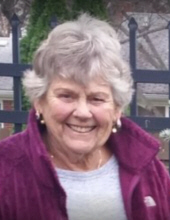 Mary Patricia “Patty” Mennel, 81, of Indianapolis passed away at her residence after a courageous battle with pancreatic cancer on November 24, 2021. Patty was born on January 9, 1940 at St. Vincent Hospital in Indianapolis to the late John and Helen (Custard) O’Neill. On May 7, 1960 Patty wed Richard “Dick” Mennel; Dick preceded Mary in death on March 6, 2001.

A proud alumna, Patty was part of the first graduating class of Scecina Memorial High School in 1957. Patty enjoyed attending class reunions, participating in various alumni events, and donating to scholarship funds for the Catholic high school. Patty was part of the initial staff for Channel 13 news in Indianapolis where she worked behind the scenes as a production editor on set as well as for commercials. When she and Dick decided to start a family, Patty left Channel 13 and stayed home to raise her children. Later she went on to work in the cafeteria at Perry Township schools when her children grew up. Shortly after Dick passed away, Mary began a position at Kohl’s that was only supposed to be for the Christmas season of 2001. That temporary Christmas position turned into a nearly 20-year role; Mary officially retired in December of 2020.

Although Patty had multiple roles throughout her life, her roles as a wife, mother, and grandmother were most important to her. She never missed an event of her grandchildren or great grandchildren. Her support and love for her family was unwavering. She lived to host family functions at her home around her treasured swimming pool. If it was warm outside, you were sure to find Patty floating on a raft with the telephone and a book poolside. She often joked that she worked at Kohl’s to pay for her pool chemicals; being in the warm sun was something she truly enjoyed. If you ever attended a gathering at Patty’s home, you knew the hot tub and pool were the place to be. She was the consummate hostess and loved to be surrounded by people. As much as she loved people, they loved her. Each of her in-laws were loved like they were her own; she was the best mother-in-law.

Aside from working, caring for her family, or hosting the most recent get-together, Patty was a member of St. Roch Catholic Church and previously, St. Mark Catholic Church. She enjoyed being active in the bereavement ministry serving funeral meals and St. Vincent de Paul Society. She made it a point every Christmas to pull multiple items children needed off the Angel Trees at church and frequently donated to the H.O.O.P box at St. Barnabas. Patty was quietly generous, never performing these acts expecting recognition for them. She had a servant’s heart devoted to those she loved and strangers alike. Her strength and fun-loving spirit along with her generosity are just a few of Patty’s traits that will live on in those she leaves behind.

Along with her parents and husband, Patty was preceded in death by a brother, James William "Bill" O'Neill.

Patty’s Life Celebration® visitation will be held at O’Riley Funeral Home, 6107 South East Street, Indianapolis, Indiana 46227 on Tuesday, November 30, 2021 from 4:00 to 8:00 PM. On Wednesday, December 1, 2021 Morning Prayers will be said at the funeral home prior to the celebration of Mass at 9:30 AM. The Mass of Christian Burial will be celebrated by Father Douglas Hunter on Wednesday, December 1, 2021 at 10:00 AM in St. Roch Catholic Church. Following the celebration of Mass, Patty will be laid to rest next to Dick in Calvary Cemetery, Indianapolis.

In lieu of flowers, the family is requesting memorial donations be made to H.O.O.P or American Cancer Society. Envelopes will be provided at the funeral home, as well as a list of items H.O.O.P is currently needing that can be brought to the visitation on Tuesday evening. O’Riley Funeral Home is serving the Mennel family. Please visit www.ORileyFuneralHome.com to share a favorite memory of Patty with her family on the online guest registry.

To order memorial trees or send flowers to the family in memory of Mary Patricia "Patty" Mennel, please visit our flower store.