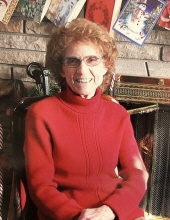 She worked for General Motors for more than 25 years as a seamstress and later as a spot welder. A longtime member of University Heights Christian Church, Mrs. Anderson also enjoyed being a part of the church’s quilting club. She was also an avid gardener who was happy growing flowers and vegetable alike. She will be fondly remembered for her kind and giving nature, her strong faith in the Lord, and her love for her family.

Visitation will be on Friday, August 9, 2019, 4 to 8 p.m., and on Saturday, August 10, 2019, 10 to 11 a.m., in the Daniel F. O’Riley Funeral Home, 6107 S. East Street, Indianapolis. The funeral service will begin at 11 a.m., Saturday, at the funeral home. Burial will follow at Calvary Cemetery. Visit www.ORileyFuneralHome.com to share a favorite memory or to sign the online guest registry.

To order memorial trees or send flowers to the family in memory of Mary Pauline Anderson, please visit our flower store.