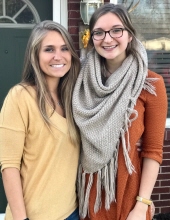 Meredith attended St. Mark Catholic Elementary School and graduated from Roncalli High School in 2015. She was a junior at the University of Southern Indiana, where she was studying as a Presidential Scholar. She was majoring in sociology and political science; Meredith was determined to make a difference in the world. She was a free spirit, joyful, adventurous, loyal, goal oriented, and inspiring. Meredith recently studied abroad and loved traveling to thirteen different countries in Europe, taking in as much as she possibly could. As a student at USI, she became active with campus outreach and greatly enjoyed being a part of the Orlando Project. Meredith will be fondly remembered by her loving family and many friends.

Friends and family will gather to celebrate the life of Meredith Grace Opel on Friday, December 1, 2017, 3 to 8 p.m., in the gymnasium at Roncalli High School. The Mass of Christian Burial will be celebrated at 10 a.m., Saturday, December 2, 2017, in the gymnasium at Roncalli. Burial will be in Calvary Cemetery. In lieu of flowers, memorial contributions may be made to the Orlando Project, c/o Campus Outreach at the University of Southern Indiana or to Roncalli High School. Funeral arrangements are entrusted to the Daniel F. O’Riley Funeral Home. Visit www.ORileyFuneralHome.com to share a favorite memory or to sign the online guest registry.

To order memorial trees or send flowers to the family in memory of Meredith Grace Opel, please visit our flower store.