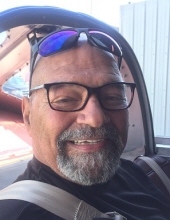 Oliver Gordon Pointer, Jr., 66, of Indianapolis, passed away December 28, 2017 at Franciscan St. Francis Health in Indianapolis after an extended illness. Born February 15, 1951 in Van Nuys, California, Oliver was the son of the late Oliver Gordon and Mary Frances (Quattrocchi) Pointer. On June 7, 2003 he was united in marriage to Annette M. (Poliak) Pointer and she survives.

Oliver is also preceded in death by his son, Ryan Reach; his daughter, Melisa Pointer; and his sister, Mary Ann Carroll.

Family and friends will gather to celebrate the life Oliver Gordon Pointer from 2:00 p.m. until 4:00 p.m. on Thursday, January 11, 2018 at the Daniel F. O’Riley Funeral Home, 6107 S. East Street. Indianapolis. The memorial service will begin at 4:00 p.m. on Thursday, January 11 at the funeral home. Visit www.OrileyFuneralHome.com where you may express online condolences with Oliver’s family.

To order memorial trees or send flowers to the family in memory of Oliver Gordon Pointer, Jr., please visit our flower store.