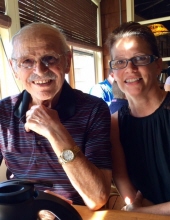 Otto Gmuender, 87, of Indianapolis and formerly of Sag Harbor, New York, passed away August 31, 2017 at Community Hospital South in Indianapolis. Otto was born May 27, 1930 in Bad Wurzach, Germany to the late Jakob and Anna (Petretti) Gmuender. On November 13, 1954, he was united in marriage to Elizabeth M. Bernhardt.

Otto proudly served his country in the United States Army during the Korean War serving in the American Occupational Forces in Germany from 1954 until 1956. Otto and Elizabeth owned and operated Otto’s Nord See Delikatessen in South Hampton, New York for 28 years. After retiring, they enjoyed spending time together in Florida.

Along with his parents, Otto is also preceded in death by his brother, Erik Gmuender; his sister, Elsa Gaile; and his granddaughter, Rosa.

Family and friends will gather to celebrate the life of Otto Gmuender from 10:00 a.m. until 11:00 a.m. on Saturday, September 2, 2017 at Our Lady of the Greenwood Catholic Church in Greenwood, Indiana with Mass to follow at 11:00 a.m. on Saturday at the church. Burial will take place at St. Andrew Cemetery in Sag Harbor, New York. Local arrangements are entrusted to the Daniel F. O’Riley Funeral Home, 6107 S. East Street, Indianapolis, Indiana. Please visit www.OrileyFuneralHome.com where you may express online condolences with the family.

To order memorial trees or send flowers to the family in memory of Otto Gmuender, please visit our flower store.