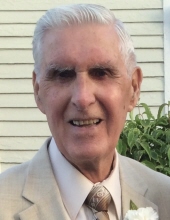 Pat was a high school graduate from the St. Meinrad Seminary and earned a bachelor’s degree in business from Marian College. He proudly served his country in the United States Army. He worked as a supervising inspector for the United States Customs Service for 37 years, retiring in 2000.

Pat was an active member of St. Mark Catholic Church. He enjoyed volunteering for the St. Vincent de Paul Society and was a 3rd Degree member of the Knights of Columbus, Monsignor Downey Council #3660.

He is also preceded in death by his siblings, Joseph, Richard, and John Henn and Margaret Earl.

Family and friends will gather to celebrate the life of Pat Henn from 4:00 p.m. until 8:00 p.m. on Tuesday, July 23, 2019 in the Daniel F. O’Riley Funeral Home, 6107 S. East Street, Indianapolis. Recitation of the Rosary will begin at 7:30 p.m. on Tuesday at the funeral home. Morning prayers will begin at 10:00 a.m. on Wednesday, July 24, 2019 at the funeral home followed by Mass of Christian Burial at 10:30 a.m. on Wednesday at St. Mark Catholic Church, 535 E. Edgewood Ave., Indianapolis. Burial will follow at St. Joseph Cemetery. Visit www.OrileyFuneralHome.com where you may express online condolences to the Henn family.

To order memorial trees or send flowers to the family in memory of Patrick C. Henn, please visit our flower store.