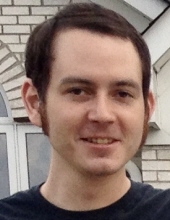 Patrick Dean Zielinski, 29, of Indianapolis, passed away at his residence on Saturday, March 7, 2020. Patrick was born in Evansville on December 11, 1990 to Ted and Lori (Patrick) Zielinski.

Patrick was a 2009 graduate of Roncalli High School. While he was a student at Roncalli, he played saxophone in both the marching and jazz bands. Upon graduating, Patrick attended Ball State University.

Patrick was a kind and gentle person. Those who knew him appreciated his sense of humor. He was a gifted artist and writer. He achieved black belt in Tae Kwon Do. He was a comic book enthusiast.

Patrick was preceded in death by his paternal grandmother, Roseann Zielinski.


Visitation will be held Saturday, March 14, 2020 from 11:00 AM - 1:00 PM with the funeral service beginning at 1:00 PM in the O'Riley Funeral Home, 6107 South East Street, Indianapolis. A memorial mass is being planned for a later date in St. Jude Catholic Church, Indianapolis. In lieu of flowers, please consider donating to Rosie's Southside Animal Shelter, 1614 West Edgewood Avenue, Indianapolis, IN. 46217, (317)781-0755. Please visit www.ORileyFuneralHome.com to leave an online condolence for the Zielinski family.

To order memorial trees or send flowers to the family in memory of Patrick Dean Zielinski, please visit our flower store.