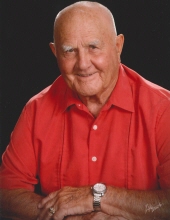 Raymond J. “Dutch” Roembke, Sr., 90, of Indianapolis, passed away Thursday, March 1, 2018 at his home surrounded by his loving family. One of 11 children born to William and Anna (Sauer) Roembke, Dutch was born in Indianapolis on September 25, 1927. On September 10, 1949 he was united in marriage to his loving wife, Rosemary “Posey” (Sullivan) Roembke and she preceded him in death on June 27, 2004.

Dutch proudly served his country as a paratrooper in the United States Army from 1945 until 1947. After serving in the Army he worked in production at Eli Lilly & Company for several years. Best known as “Dutch the Milk Man,” he was an independent distributor for Mutual Milk and Golden Guernsey milk companies for many years. Dutch also owned and operated the Baskin-Robbins at 46th and Arlington and at the Meadows Shopping Center for over 17 years; he retired 1988. After retiring, he was a courtesy driver for ATA for several years.

Along with his parents and wife, Posey, Dutch was also preceded in death by nine of his siblings.

Family and friends will gather to celebrate the life of Dutch Roembke from 2:00 p.m. until 8:00 p.m. on Monday, March 5, 2018 in the Daniel F. O’Riley Funeral Home, 6107 S. East Street, Indianapolis. Morning prayers will begin at 9:30 a.m. on Tuesday, March 6, 2018 at the funeral home followed by Mass of Christian Burial at 10:00 a.m. on Tuesday at St. Roch Catholic Church. Burial will follow at Calvary Cemetery. In lieu of flowers, please consider making memorial donations to A Real Hope For CDH at tinyhero.org or St. Roch Catholic Church. Visit www.OrileyFuneralHome.com where you may express online condolences to Dutch’s family.

To order memorial trees or send flowers to the family in memory of Raymond J. "Dutch" Roembke, Sr., please visit our flower store.