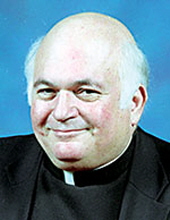 Rev. Gerald J. Kirkhoff, 76, a priest of the Archdiocese of Indianapolis, passed away December 30, 2019, after a brief illness. A lifelong resident of Indianapolis, Fr. Kirkhoff was born October 3, 1943, to the late Edward and Rose (McHugh) Kirkhoff. He was ordained a priest on May 24, 1969 and was pleased to have celebrated his Jubilee Mass last May.

He served as an associate pastor of St. Mary in New Albany, St. Jude and St. Ann in Indianapolis, while also teaching at Roncalli and Scecina High Schools. He served as pastor of his home parish, St. Philip Neri from 1978-85 and St. Jude from 1985-2002. In 2002, Fr. Kirkhoff became the pastor of St. Pius X and also sacramental minister at St. Andrew the Apostle. He was the pastor of Good Shepherd from 2010 – 2014 when he retired from active parish ministry. A natural leader, Fr. Jerry served as the dean of the Indianapolis East, South, and North Deaneries through the years. For many years, he was the Vicar for the Advocacy for Priests, Director for the Archdiocesan Mission Office and Society for the Propagation of the Faith. Most recently, Fr. Jerry served as the Vicar for the Retired Priests of the Archdiocese.

In addition to his parents, he was preceded in death by his brother, Bob Kirkhoff; sister-in-law, Susann Kirkhoff; brother-in-law, Fritz Leucht; great nephew, Nicholas Kirkhoff.

All services for Fr. Jerry Kirkhoff will be held at Saints Peter and Paul Cathedral, 1347 N. Meridian Street, Indianapolis. Reception of the Body will begin at 3 p.m., Sunday, January 5, 2020. Visitation will be Sunday, 3 – 7 p.m. Visitation will conclude with the Vigil Service at 7 p.m. Additional visitation will be held from 9:30 – 11 a.m., Monday, January 6, 2020. The Funeral Mass will begin at 11 a.m. Monday, with interment following in the Priests’ Circle at Calvary Cemetery. Memorial contributions may be made to Holy Family Shelter, to Scecina Memorial High School, or to St. Paul Hermitage; envelopes will be available. O’Riley Funeral Home is entrusted with arrangements. Visit www.ORileyFuneralHome.com to share a favorite memory or to sign the online guest registry.

To order memorial trees or send flowers to the family in memory of Rev. Gerald J. Kirkhoff, please visit our flower store.