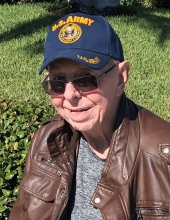 He graduated from Broad Ripple High School and proudly served in the United States Army Air Corp during the Korean War. Mr. Johnson worked for Praxair (formerly Union Carbide) for 27 years, retiring in 1993. An accomplished woodworker, he enjoyed keeping busy in his retirement years fulfilling many custom order pieces. Additionally, he worked for Elite Casino Enterprise and especially enjoyed dealing three card poker. Always generous with his time, he would do anything to help a friend or family member. He will be fondly remembered for his kind and loving nature.

He was preceded in death by his mother, Delphine Johnson.

Visitation and services will not be observed. In lieu of flowers, memorial contributions may be made to the St. Jude’s Children’s Hospital. Funeral arrangements are being handled by the O’Riley Funeral Home. Visit www.ORileyFuneralHome.com to share a favorite memory or to sign the online guest registry.

To order memorial trees or send flowers to the family in memory of Richard D. Johnson , please visit our flower store.