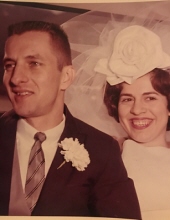 Dick was a 1955 graduate of Cathedral High School, attended Marian University, and proudly served in the United States Army. He was employed for 20 years at Stokely-Van Camp as an industrial engineer before working for 30 years as a contract negotiator for the federal government. The Van Noy family were longtime parishioners at Holy Spirit Catholic Church, and more recently, Dick was a member of Saints Francis & Clare Catholic Church in Greenwood. A man with a strong work ethic, he also enjoyed gardening, NASCAR, hockey, and was a World of Outlaws fan. He will be fondly remembered by his loving family and many friends.

In addition to his parents, he was preceded in death by siblings, Margaret and Mike Van Noy.

Visitation will be on Tuesday, April 9, 2019, 5 to 8 p.m., in the Daniel F. O’Riley Funeral Home, 6107 S. East Street, Indianapolis. The Mass of Christian Burial will be celebrated at 10:30 a.m., Wednesday, April 10, 2019, 10:30 a.m., in Saints Francis & Clare Catholic Church, Greenwood. Cremation will take place following Mass, and inurnment will be private in the Resurrection Garden at the church. Memorial contributions may be made to the School Ministry at Saints Francis & Clare. Visit www.ORileyFuneralHome.com to share a favorite memory or to sign the online guest registry.

To order memorial trees or send flowers to the family in memory of Richard J. Van Noy, please visit our flower store.