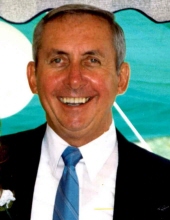 Bob proudly served his country in the United States Army during the Korean War. He graduated with a bachelor’s degree in marketing from Butler University, where he was a member of the Sigma Chi fraternity. Bob spent most of his professional career with Bob Cook Realty as its co-founder and president, serving in that role for over 50 years before retiring in 2011.

Bob was a charter member of St. Jude Catholic Church where he served in various leadership positions, including president of the Parish Council, Men’s Club, and recipient of its Catholic Man of the Year Award. Bob acted as an advisor to various archbishops and the Archdiocese of Indianapolis throughout his life, and was a past member of the Archdiocesan Board of Education. In addition, he was past president of the Serra Club of Indianapolis, as well as a member of the Knights of The Holy Sepulchre and Knights of the Malta, one of the highest distinctions bestowed upon a layperson in the Catholic Church. Bob was also a lifetime member of the Knights of Columbus, Monsignor Downey Council #3660, and a past recipient of the Knights of Columbus Man of the Year.

Civically, Bob served his community as a board member and volunteer with countless organizations, including serving as President of the Adult and Child Mental Health Board of Indianapolis and as a member of the Marion County Zoning Board. Bob was also an active supporter of Roncalli High School and a former president of its Board of Directors.

One of Bob’s greatest interests was that of being a thoroughbred owner and horseracing enthusiast. He was a member of the Thoroughbred Club of America, the Churchill Downs Club, and the Keeneland Club. Bob’s other passions included playing the ukulele, watching movies, attending Butler basketball games, and spending time with family and friends.

Family and friends will gather to celebrate Bob’s life on Thursday, April 12 from 4 p.m. to 8 p.m. at St. Jude Catholic Church, 5353 McFarland Rd., Indianapolis. Mass of Christian Burial will be celebrated at 11:00 a.m. on Friday, April 13 at the church. Burial will follow at Calvary Cemetery. In lieu of flowers, the family suggests considering a donation to St. Jude Catholic Church or Saint Meinrad Seminary and its School of Theology; envelopes will be provided.
Final care and arrangements are entrusted to the Daniel F. O’Riley Funeral Home. Visit www.OrileyFuneralHome.com where you may express online condolences to the Cook family.

To order memorial trees or send flowers to the family in memory of Robert J. Cook, please visit our flower store.