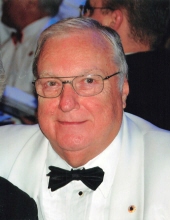 Robert M. Lynch, 83, lifelong Indianapolis resident, passed away December 1, 2021. Bob was born February 3, 1938, to the late John and Mildred (Dietrich) Lynch. Bob was married to the love of his life, Dorothy Jean “Dottie” (Woerdeman), who preceded him in death in 2013.

He graduated from Sacred Heart High School and proudly served in the United States Air Force. Bob earned a Bachelor’s degree from Indiana University. He enjoyed a successful career in banking, working for Indiana National Bank, retiring from Bank One as the Vice President of Operations.

A devout Catholic, Bob was a member of St. Jude Catholic Church. It is difficult to think about the Knights of Columbus without thinking about Bob Lynch, and vice versa. Bob was a member of the K of C Council 3660 and the Bishop Chatard Assembly 245. He served as State Deputy, District Master and on the Indiana K of C Charities Fund Board for the Indiana State Council. He was past Grand Knight of Council 3660 and the present Financial Secretary for Council 3660. Bob was awarded the Layman of the Year in 2006 by the Bishop Chatard Assembly 245. Bob was also very involved with Gibault Children’s Services. He served in various roles on the Gibault Board of Trustees, including chairman and vice chairman, from 1998 until his passing. He also served on the Gibault Care Board and was past president of the Gibault Foundation Board. Bob was also very involved in Knights of Columbus Bowling, serving as Executive Secretary of the International Knights of Columbus Bowling Association. Additionally, he was secretary of the Sacred Heart/Holy Name Bowling League for years.

Bob loved to travel with Dottie, especially cruising. He was described as his grandchildren’s and great grandchildren’s biggest cheerleader – often to be found on the sidelines of sporting events, cheering on his family. Bob never met a stranger and loved being sociable and keeping up with family and friends. Always proud of his Irish heritage, he was a member of the Ancient Order of Hibernians. He was a proud Notre Dame fan and Roncalli High School supporter. He had a true gift of making people feel special. He was Papa Bob to not only his own grandchildren, but many extended relatives and friends. Bob will be fondly remembered by his loving family and many friends for his devotion to his faith, family, and his community.

In addition to his parents and Dottie, Bob was preceded in death by a sister, Barbara Waddick; granddaughter, Kaitlin M. Lynch.

Bob’s Life Celebration® Visitation will be Sunday, December 5, 2021, 2 to 7 p.m., at the O’Riley Funeral Home, 6107 S. East Street, Indianapolis. Recitation of the Rosary will begin at 6:30 p.m. Prayers will be said at 9:30 Monday, December 6, 2021, at the funeral home. Mass of Christian Burial will begin at 10 a.m., in St. Mark Catholic Church. Burial will follow at Calvary Cemetery. In lieu of flowers, memorial contributions may be made to Katie’s Hope Foundation, 5841 Trophy Oaks Court, Indianapolis, IN 46237 or to Gibault, Inc., PO Box 2316 Terre Haute, IN 47802. Visit www.ORileyFuneralHome.com to share a favorite memory or to sign the online guest registry.

To order memorial trees or send flowers to the family in memory of Robert M. Lynch, please visit our flower store.

Recitation of the Rosary