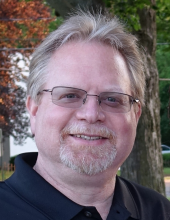 Rohn L. Millican, Jr., 53, of Indianapolis, passed away unexpectedly into the loving arms of Jesus on March 28, 2018. Rohn was born in Jackson, Michigan on December 15, 1964. On September 9, 1989 he was united in marriage to his loving wife, Margaret A. (West) Millican and she survives.

Rohn received his bachelor of science degree in biochemistry from Michigan State University; he worked in bio chemistry research at Eli Lilly and Company for 28 years. He loved all things scientific, photography, stain glass art, and scuba diving. Rohn was kind, loving, and compassionate to all of those he met. He proudly served his country in the United Army and the National Guard. He was a faithful member of Nativity Catholic Church.

He will be sorely missed by all. Rohn was greeted in death by his father-in-law, John West and his grandparents.

Family and friends will gather to celebrate the life of Rohn Millican from 4:00 p.m. until 8:00 p.m. on Friday, April 6,2018 in the Daniel F. O’Riley Funeral Home, 6107 S. East Street, Indianapolis. Mass of Christian Burial will be celebrated at 10:00 a.m. on Saturday, April 7, 2018 at Nativity Catholic Church. Entombment will follow at Our Lady of Peace Cemetery. In lieu of flowers, please consider making a donation to the Science Department at Roncalli High School; envelopes will be provided. Visit www.OrileyFuneralHome.com where you may express online condolences to Rohn’s family.

To order memorial trees or send flowers to the family in memory of Rohn L. Millican, Jr., please visit our flower store.

Our Lady of Peace Cemetery