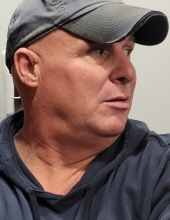 Steve was born on October 17, 1967, in Beech Grove to Michael and Kathleen Kuntz Clements.

Steve graduated from Roncalli High School in 1986. He was the football co-captain for Roncalli’s state championship in 1985 and was an all-state tackle for that team. Steve also was a wrestler and made it to the wrestling state finals. He worked at IU Health in their medical warehouse.

Steve journeyed the country following the Grateful Dead. He enjoyed all music. Steve loved going to the track to play the horses. His biggest joy in life was his family and caring for his nieces and nephews and supporting everything that they did. He will be remembered as caring for others and enjoying life to the fullest.

In memory of Moby pick your favorite horse and bet on it.

To leave a memory and tribute for Steve please visit www.orileybranson.com

To order memorial trees or send flowers to the family in memory of Steven "Moby" Clements, please visit our flower store.