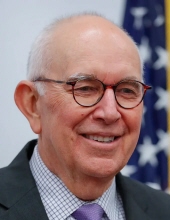 Curry was widely recognized as one of the top trial attorneys in Indianapolis when he was elected Marion County prosecutor in 2010. He assumed control of an office that had been tarnished by scandal and controversy that led to a collapse of public confidence.

He immediately took steps to establish a culture of bipartisan professionalism and integrity that endeared him not only to the staff but also to the public who rewarded him with re-election in 2014 and 2018. He is believed to be the only three-term Democratic prosecuting attorney in Marion County history. Curry stepped down from his leadership position in 2019 to deal with the prostate cancer he had been battling since 2015 but remained on staff as a deputy prosecutor working on white collar crime.

His successor, Ryan Mears, credits his former boss with not only restoring integrity to the Marion County Prosecutor’s Office but also modernizing the office in both policy and administration. “Terry was a man of action and of progress,” Mears said in a statement. “He was a leader who unapologetically stood for fairness and integrity, and he influenced others to do the same throughout his accomplished career.”

IMPD Chief Randal Taylor echoed that sentiment in a statement. “Prosecutor Terry Curry will always be revered as a man of great integrity and will be remembered for his unwavering commitment and dedication to the Indianapolis community. He was intentional in his pursuit of justice and always thought through the impacts of how his decisions impacted our larger community.”

Former Marion County Prosecutor Stephen Goldsmith agreed. “Integrity, professionalism, and the ability to put others first — those are the great benefits Terry gave to the residents of Marion County.” Goldsmith, a Republican, served as Marion County Prosecutor from 1979 to 1991 and recruited Curry to run the Office of the Grand Jury. “John Tinder, my chief deputy, and I wanted to establish a bipartisan professional office and he had found a civil litigator who was a Democrat,” he recalled. “Terry recently reminded me that he asked John to make it clear to me that he was a Democrat. We didn’t have a problem with that.”

He continued, “During the time I was prosecutor I never told him what to do in terms of a decision, and he never overstepped the confines of the office as he discharged his professional duties. Terry was low-key, which played well to the Grand Jury. The Grand Jury is where you can demonstrate integrity but can also destroy reputations. We need more people like Terry who stand for justice and integrity, and have an ethical approach.”

Mayor Joe Hogsett’s statement recognized Curry as a principled and dedicated public servant. “His career was defined by a professionalism and commitment to the criminal justice system that has served as an example to countless colleagues, peers, and young lawyers in Indianapolis.”

A Tradition of Service
The eldest of three sons, Curry often cited his parents, William and Lois, as a major source of inspiration. His father devoted his entire career to education, culminating in his role as superintendent of schools at Mooresville Consolidated Schools where a wing of the high school is now named in his honor as the William R. Curry Center. Curry referred to his mother, who passed away in January, 2021 at the age of 91, as the most compassionate and kindest person he ever knew. She bequeathed to her son a recognition of the importance of service to others by putting their needs ahead of one’s own.

Curry was a graduate of Mooresville High School (Class of 1967) and was inducted into the school’s Wall of Success in 2015. He was the high school’s first all-around athlete, playing golf, basketball, and baseball. After enrolling at Butler University in 1967 with academic and athletic scholarships, Curry continued playing basketball and golf with the Bulldogs. Academically, he pursued a pre-law curriculum, obtaining a bachelor’s degree in political science and history. He avidly followed the tumultuous presidential campaign of 1968 that inspired his interest in American politics and a corresponding lifelong loyalty to the Democratic Party.

After completing four years at Butler, he enlisted in the U.S. Army and served a two-year enlistment including 18 months of assignment at Fort Polk, Louisiana, where he distributed Winter Soldier an underground newspaper published by Vietnam Veterans Against the War and the Winter Soldier organization. After receiving an honorable discharge from the Army in 1973, Curry delayed enrollment in law school so he could concentrate on raising his 3-year-old daughter, Melissa.

He was hired as a reporter for the Indianapolis News by fellow Mooresville resident, city editor Wendell Trogdon. During his two years as a general assignment reporter, Curry contributed to the Herman Hoglebogle consumer advocate column, and began researching and reporting on a subject that became a focus of his career: white collar crime. His published efforts were recognized in 1975 when he was honored by the Community Service Council of Metropolitan Indianapolis with a Community Appreciation for Service in Public Enlightenment and Relations (CASPER ) Award, “for diligently and aggressively tackling the highly complex and controversial issue of red-lining.” Today, these discriminatory lending practices are recognized as evidence of systemic racism. In a 1974 article, Curry quoted a local bank executive, “The only red-line I see in this is Marxist.”

Curry practiced as a trial lawyer for 30 years in Indiana and federal courts, serving as a law firm partner and as a solo practitioner and was lead counsel in more than 125 court and jury trials, arbitration, and injunction hearings. Based upon a survey of an attorney's peers, a national attorney service awarded him an AV Pre-eminent 5.0 out of 5.0, the highest possible rating for ability and ethical standards.

Curry’s second stint as a Deputy Prosecutor occurred during Prosecutor Jeff Modisett’s term from 1991-1994. “I took a pay cut to return and a lot of people thought I was crazy,” he said during the 2019 press conference announcing his resignation. While a deputy prosecutor, he was primarily responsible for prosecution of white collar crime and political corruption matters and he also volunteered on cases outside of his area of primary responsibility, serving at times as a supervisor in criminal court and the grand jury, coordinating the full-time investigators. In his six years as a deputy prosecutor, Curry prosecuted hundreds of cases, including murder, robbery, burglary, forgery, theft, and drug offenses.

Curry loved music. Favorite artists included Bob Dylan, the Band, and Frank Zappa but he was particularly fond of the Grateful Dead. Long-time friend and former colleague Donna Huber remembered going to lunch with him and being surprised to learn he was a fan. “I didn’t know you were a Deadhead,” she said. “Isn’t everybody?” he replied.

His love of music extended to the local music scene where he was a reliable supporter of bands through the years including the Spirtles, Today’s Young Talent, Gravity Hill, 3:1, Opal Fly and KAPOW, and his brother Jim’s bands, Hot Jimmy and the Charred Remains, and Melodious Thonk. So it was natural for him to create Curry Palooza, an annual event that showcased local talent, generated exposure for his political career, and provided an opportunity to thank supporters and have a good time.

Former Marion County Democratic Party Chair Joel Miller said that some of the old guard in the Democratic party – he called them “wingtips” – questioned the benefits of such a political event. “It drove them crazy. It wasn’t a steakhouse event or standing around a law firm lobby,” he recalled. “The wingtips didn’t participate. They never understood the point — he was doing a serious job but wasn’t going to be serious about everything; there had to be a relief valve.”

Curry was a well-known figure in downtown Indianapolis, often seeing friends at the Indianapolis City Market or while attending a Pacers game as a long-time season ticket holder. He lived an active lifestyle and enjoyed biking and golf, spending time with friends on the links of Broadmoor Country Club.

A dedicated supporter of many local causes and people, Curry was an active member of the Marion County Democratic Party, supporting candidates up and down the ballot for years. In 2008, he spent many hours canvassing for the historic election of Barack Obama. He supported Best Buddies of Indiana and was an advocate for employment of individuals with disabilities.

Memorial contributions may be made to I.U. Simon Cancer Center for prostate cancer; Indiana K-9 Search and Recovery; ICAN, or Best Buddies of Indiana

To order memorial trees or send flowers to the family in memory of Terry Curry, please visit our flower store.