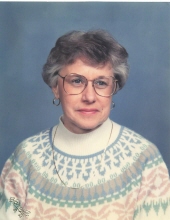 Therese Ann Maxwell, 86, died on March 13, 2022 at the Franciscan House Hospice. Born on Nov. 10, 1935, she was the 6th of 7 children of John and Gladys Maxwell. Therese graduated from St. Roch Grade School and St. John Academy. She then entered the Sisters of Providence at St. Mary of the Woods and received her BS Ed while at the Woods. Later she finished her MS Ed from Indiana University. Therese continued her teaching career in the Perry Township School System. She was a Language Arts Teacher in Middle School and finished her career teaching 4th grade students at Lincoln Elementary.

Therese had many friends throughout the years. Some were her school teacher friends, others from the Megs, a euchre group which emerged from friends she made while at St. Mary of the Woods. Having attended Mass most weekends at the Carmelite Monastery she became involved with the Association of Contemplative Women and enjoyed participating in all of their activities including monthly regional meetings and retreats held all over the United States.

After retirement she joined a quilting group at St. Roch and quickly found new friends among the women in the group. We would be remiss if we failed to mention the more than 120 Christmas stockings she crocheted for each one in the family. Marriages, new babies, until recently as prolific demand exceeded production, all received their stockings when they became part of the Maxwell family. Maybe crafters of the next generation will take on that project.

Of course, her favorite friends were the members of our very large family which met periodically at Estes Park in Colorado for a family reunion. Brothers, sisters, nieces and nephews and all the in-laws, enjoyed the weeks we shared together making memories. Some have greeted her in Heaven. Predeceasing Therese were her parents, John and Gladys Maxwell, siblings Peter J., Thomas F., Therese (Tom’s wife), Mary (Mike’s wife), and a nephew, Vincent Maxwell, son of John and Marge Maxwell. She is survived by John (Marge), Michael, Mary Jane (Robert) Biro, Paula (Roger) Koch, and sister-in-law Carron Maxwell.

Therese led a very full life and lived it on her own terms. Those of us who knew her, felt privileged to be a part of her beautiful life.

The family wishes to thank the staff at the Franciscan Hospice House who lovingly cared for her (and put up with all her visitors) during her 2 week stay with them.

Therese’s Life Celebration Visitation will be held Wednesday, March 16th, from 3:00 to 7:00 PM in the chapel at O’Riley Branson Funeral Service & Crematory, 6107 S. East Street, Indianapolis. Morning Prayers will be said at the funeral home prior to the celebration of Mass on Thursday morning at 12:30 PM. The Mass of the Resurrection will be celebrated on Thursday, March 17th at 1 PM in St. Roch Catholic Church, 3600 S. Pennsylvania Street, Indianapolis.

Contributions may be made in her name to the Sisters of Providence at St. Mary of the Woods, St. Vincent DePaul Society or to your favorite charity.

O'Riley - Branson Funeral Service & Crematory is serving the family. Visit www.ORileyBranson.com to share a favorite memory or to sign the online guest registry.

To order memorial trees or send flowers to the family in memory of Therese Ann Maxwell, please visit our flower store.