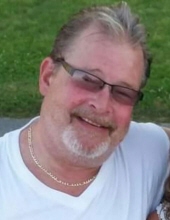 Thomas Edward “Tom” Muth, 60, of Girard, Ohio, passed away unexpectedly in Indianapolis, Indiana on May 31, 2021. He was born in Youngstown, Ohio on June 22, 1960 to the late Charles and Norma (Angeletti) Muth.

Tom graduated from Cardinal Mooney Catholic High School in Youngstown Ohio. Tom worked at various steel mills throughout his life, such as Hunt Steel and North Star Steel where he met his wife Deborah (Mock) Martin. Debbie and Tom wed after 35 years of friendship on May 26, 2018.

Tom was a hard worker all his life. He loved having money in his pockets (and he can spend it too). Tom did not lack in generosity; he would give you the shirt off his back if he needed to, and was always willing to help people. He was a very easy-going guy, always meeting new people and making new friends wherever he went. In his spare time, Tom loved to go fishing, tinkering around and fixing things, and really enjoyed his music.

Tom loved life; he was always smiling. He enjoyed cheering on the Pittsburgh Steelers, trips to the beaches, and his love of plants and landscaping was a joy to him. Tom will be deeply missed by all of those who knew and loved him.

Along with his parents, Tom was preceded in death by his brother, Michael.

Survivors include the love of his life and wife, Debbie (Mock) Martin Muth of Girard, Ohio; his son, John (Emily) Muth of Indiana, and his daughter Annmarie (Devon) Novotney of Indiana; his two stepsons, James Martin and Daniel Franqui both of Girard, Ohio and stepdaughter, Tracie Franqui, also of Girard, Ohio; 5 grandchildren and 3 step-grandchildren; his sister Kathy (Michael) Cox of North Carolina; his brother, Chuck (Carol) Muth of Rodgers, Ohio and numerous nieces and nephews. Tom leaves behind many friends in Indiana and two dear friends from elementary school, Donny Santarelli, and Paul Kane.

To order memorial trees or send flowers to the family in memory of Thomas Edward "Tom" Muth, please visit our flower store.