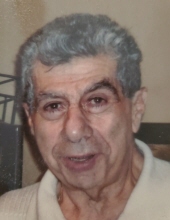 Tom graduated from Cathedral High School and received a Bachelor’s Degree from Butler University in Accounting. Along with his wife and many family members, Tom helped run the Parks and Recreation Cafeteria at 29th and Harding for over 20 years. He then went on to pursue a sales career of a manufacturer’s representative over multiple states in the Midwest.

Tom was a charter member of St. Jude Catholic Church, where he was very active as an usher and Eucharistic minister. Tom was a fan of many sports teams but had a passion for Notre Dame Football. He was always active - enjoyed bowling and always loved dancing, especially in his later years.

Visitation will be on April 25th from 3:00 PM-5:00 PM in the O’Riley Funeral Home, 6107 South East Street, Indianapolis. Morning prayers will be said prior to the celebration of Mass at the funeral home at 9:30 A.M. The Mass of Christian Burial will be celebrated on April 26th at 10:00 A.M. in St. Jude Catholic Church, 5353 McFarland Rd, Indianapolis. Please visit www.ORileyFuneralHome.com to share an online condolence with the Charles family.

To order memorial trees or send flowers to the family in memory of Thomas J. Charles, please visit our flower store.