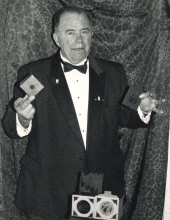 He graduated from Arsenal Technical High School and served in the United States Army during the Korean War. Tom worked for the Indianapolis Star/News as a District Sales Manager for 20 years. He was a member of St. Roch Catholic Church and the Knights of Columbus Council 3660. Tom was an avid Pacers, Colts, and Indians fans. Always one with a fun spirit, Tom also enjoyed being a magician, clown, and playing Santa Claus at Christmastime through the years. Tom will be remembered for his generosity and compassion.

Tom was preceded in death by his wife, Martha Fern “Marty” (McLaughlin) Kersey.

Visitation will be held on Friday, April 7, 2017, 5 to 8 p.m., in the Daniel F. O’Riley Funeral Home, 6107 S. East St. (US Hwy 31 South). The Mass of Christian Burial will begin at 10 a.m., Saturday, April 8, 2017, in St. Roch Catholic Church. In lieu of flowers, memorial contributions may be made to the church. Interment will be in Calvary Cemetery. Visit www.ORileyFuneralHome.com to share a favorite memory or to sign the online guest registry.

To order memorial trees or send flowers to the family in memory of Thomas Lee Kersey, Sr. , please visit our flower store.