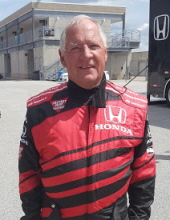 He graduated from St. Catherine Grade School, Cathedral High School, and earned a degree from IUPUI. Vince was a natural salesman and was the owner and operator of Engineering Sales for more than 30 years. His love for golf created many friendships that spanned decades. Vince was also an avid fisherman and member of the Knights of Columbus Council 3660. He never met a stranger and will be fondly remembered for his generous and compassionate spirit.

In addition to his parents, he was preceded in death by a brother, Jim Baker.

Visitation will be on Monday, January 27, 2020, 4 to 8 p.m., at the O’Riley Funeral Home, 6107 S. East Street, where morning prayers will be said at 9:30 a.m., Tuesday, January 28, 2020. Mass of Christian Burial will be celebrated at 10 a.m., Tuesday, in St. Mark Catholic Church. Inurnment to follow at Calvary Cemetery. Memorial contributions may be made to Evans Scholars Foundation, 2501 Patriot Blvd., Glenview, IL 60026. Visit www.ORileyFuneralHome.com to share a favorite memory or to sign the online guest registry.

To order memorial trees or send flowers to the family in memory of Vincent E. Baker, please visit our flower store.