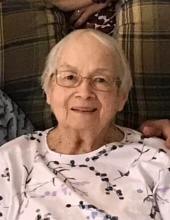 Virginia Lee Holzer, 87 of Indianapolis, died peacefully surrounded by family on September 19, 2022. She was born on March 26, 1935, in Louisville, Kentucky to William Robison and Margaret Lucille Riester Talbott.

Ginny was a graduate of St. Mary Academy. After raising her children, she was a secretary at IUPUI until her retirement in 1999.

Ginny enjoyed playing the piano, camping with family and friends, doing jigsaw puzzles, sewing, playing euchre and pinochle. She enjoyed talking and connecting with others.

There will be a memorial gathering Friday, September 23 from 9 – 11 am followed by a Mass at 11 am at St. Mark Catholic Church, 535 East Edgewood Ave., Indianapolis, Indiana.

In lieu of flowers, memorials in Ginny’s name may be made to Riley Children’s Foundation, Benedictine Sisters or Foundation for Blind Children.

Tributes and memories of Ginny may be made at www.orileybranson.com

To order memorial trees or send flowers to the family in memory of Virginia "Ginny" Lee Holzer, please visit our flower store.