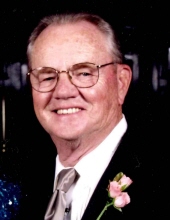 William Joseph (Bill) Schubach, Sr., 85, was a loving husband, father, grandfather, and great grandfather. Bill was a man who believed in the value of hard work--demonstrated by his own career which began with his service in the Navy during the Korean War. In 1955, he joined the Plumbers and Steamfitters Local 440 in Indianapolis as a steamfitter; and served as apprenticeship coordinator and business agent before retiring in 1992. There were years Bill worked more than one job to support his growing family. In the 1960’s and ‘70’s he still found time to coach CYO softball and kickball for St. Jude Catholic School. His children also learned to bowl, golf, and fish thanks to his expertise; and his skill with tools and home improvement was appreciated long before DIY became popular. Bill was born in Indianapolis on November 12, 1932, and graduated from Cathedral High School before joining the Navy. He was married at Holy Angels parish; and raised his family at St. Jude Catholic parish. He also enjoyed his membership at the Knights of Columbus Council 3660, where he was often found sharing a joke, a story, or a song. Bill took great pride in his family. He believed in service to others; and he was devoted to his Catholic faith. As protector, advisor, life of the party, and lover of hugs, he will be greatly missed. Bill is preceded in death by his wife of 63 years, Patricia (Davis) Schubach and his daughter, Kathleen Grow; and is survived by children William J. Schubach, Jr. (Gladys), Anne Wurtz (Robert), Timothy Schubach (Ann), Mary Johnson (Bubba), Michael Schubach, Patrick Schubach (Angela), Kristina Kirschner (David); 17 grandchildren; and 6 great grandchildren. Bill’s children and grandchildren wish to extend their heartfelt appreciation to the wonderful caregivers at St. Paul Hermitage.
Visitation will be on Thursday, February 15, 2018, 4 to 8 p.m., in the Daniel F. O’Riley Funeral Home, 6107 S. East Street, where morning prayers will be said on Friday, February 16, 2018, at 8 a.m. The Mass of Christian Burial will be celebrated at 8:30 a.m., Friday, at St. Jude Catholic Church. Entombment will follow in St. Joseph Cemetery. In lieu of flowers, memorial contributions may be made to St. Jude Catholic Church. Visit www.ORileyFuneralHome.com to share a favorite memory or to sign the online guest registry.

To order memorial trees or send flowers to the family in memory of William Joseph Schubach, Sr. , please visit our flower store.